Minor girl sold by her father recovered from brothel in Rojhan 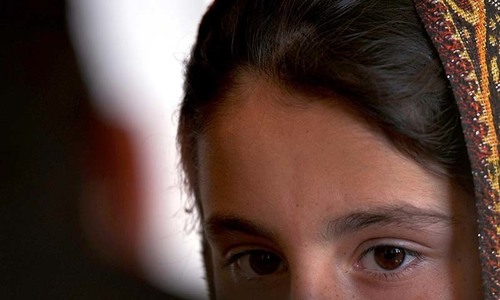 DERA GHAZI KHAN: Rojhan police claim to have recovered a 13-year-old girl from a brothel at Chak Dilbar village, arresting her father who allegedly sold her to criminals and a woman pimp.

The issue was highlighted after a video clip was uploaded on social media in which an unidentified man showed a picture of a 13-year-old girl, saying that she had been sold by her father to criminals running a brothel at Chak Dilbar village of Rojhan tehsil.

The man also appealed to the public to rescue the minor girl from the brothel.

Rojhan Station House Officer (SHO) Muhammad Ishaq said that to confirm the presence of the minor girl at the brothel, he sent an informer to the village who contacted a woman pimp.

The SHO said the informer, posing as a client, asked the woman to bring the girl. He said the woman charged Rs1,500 from the police informer and as soon as she brought the girl, a police team raided the brothel and took her in protective custody, besides arresting the woman.

The SHO said the girl confirmed to the police that her father had sold her to the criminals running the brothel.

Rajanpur District Police Officer Muhammad Afzal told Dawn that the police had also arrested the father of the minor girl and registered a case against the pimp woman and the father of the girl under sections 371A, 371B and the Prevention of Human Trafficking Act 2018.