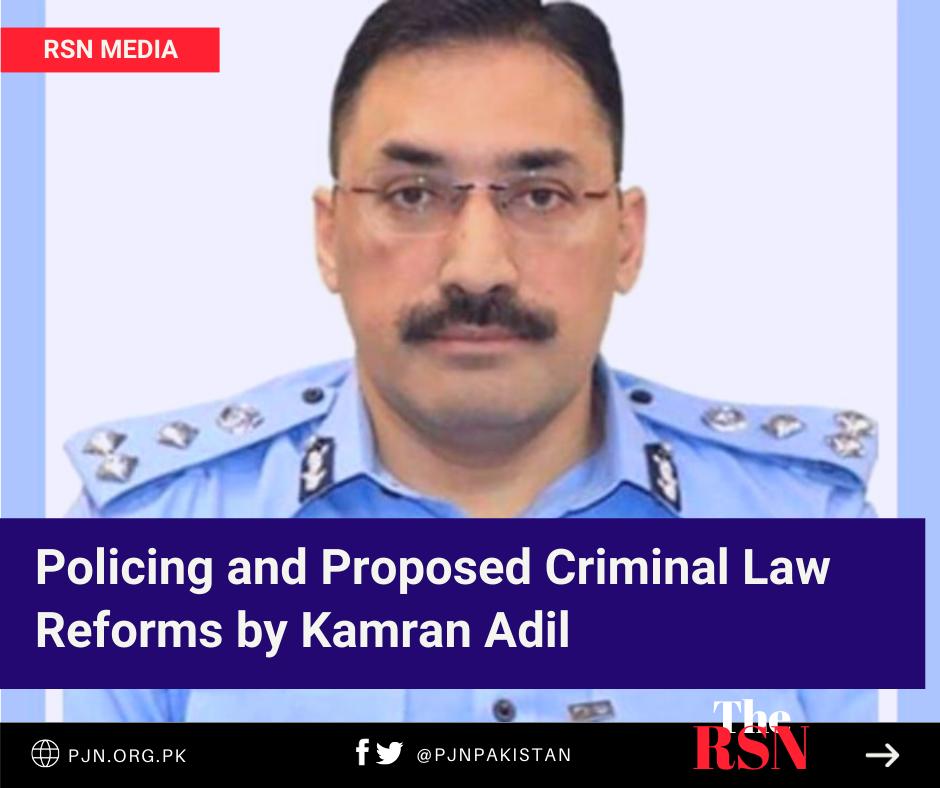 The Context In the absence of national statistics on crime and justice sector, we have to refer to international indexes. In the realm of the rule of law, the Global Rule of Law Index is used as a presumptive indicator. The latest Global Rule of Law Index of 2021 has ranked Pakistan at 130 out of 139 countries. It measured eight factors: constraints on government power, fundamental rights, absence of corruption, open government, order and security, regulatory enforcement, civil justice and criminal justice. Its details reveal that Pakistan’s criminal justice is ranked at 108 out of 139 countries whereas the civil justice is ranked at 124 out of 139 countries. This shows that there is urgent need to reform both the civil and criminal justice systems in the country. Accordingly, successive governments have tried to introduce law reforms, which essentially focused on substantive law and focused less on procedural law. In contrast, the incumbent government has introduced law reforms at the procedural level. In this regard, civil justice reforms in the form of the Code of Civil Procedure (Amendment) Act 2020 and its provincial mirror legislation were introduced. Likewise, the Letters of Administration and Succession Certificates Act 2020 and its provincial counterpart legislation was passed. Like all efforts to challenge the status quo, these initiatives faced conventional forces of inertia from different stakeholders. While acknowledging that no piece of legislation is perfect, the very initiative to challenge the entrenched status quo by applying a problem solving attitude instead of perpetuating and fortifying the existing forces of status quo needs to be applauded and supported by citizenry.

The proposed criminal law reforms were prepared by a committee headed by the federal law minister Dr. Faroogh Naseem on 14 September 2021 and were approved by the cabinet in January 2022. These legislative proposals suggest amendments in five existing statutes and plan to introduce four new laws for the Islamabad Capital Territory (ICT). The amendments are proposed to be introduced in five statutes: the Code of Criminal Procedure 1898 (CrPC), Pakistan Penal Code 1860 (PPC), the Qanoon-e-Shahadat Order 1984 (QSO), the Control of Narcotic Substances Act 1997 (CNSA), and the Railways Act 1890. The new statutes for ICT relate to establishment of prosecution service, forensic science agency, and safe city authority; these new statutes will bring the ICT at par with provinces where there are dedicated provincial laws for prosecution service, forensic agency, and safe city authority. It must be recalled that the federal government is obliged under articles 142 and 143 of the Constitution of Islamic Republic of Pakistan 1973 to introduce law reforms related to criminal law, criminal procedure, and law of evidence as these subjects are to be dealt with as concurrent between the provincial and federal legislatures. The federal government is required to take the lead regarding laws that affect human and fundamental rights of the public at large.

Policing is the function of using lawful coercive power of the state by different state organizations and the criminal justice is the larger response of the criminal justice system to crime. The proposed law reforms address many areas. Some thematic salient features affecting policing are discussed hereunder:

Police station is the basic organizational and functional unit of police and policing. Aggrieved persons approach police stations for redress of their grievances; in this way, the police station and its in-charge become central to access to justice and to opening the door of criminal justice formally. Hitherto, the officer in-charge was defined loosely. The proposed amendment redefines officer in-charge of a police station in its section 4(1) (p) of the CrPC by stating that s/he shall not be below the rank of sub-inspector with a degree of bachelors or its equivalent. For ICT, it proposes that officer in-charge shall be an Assistant Superintendent of Police (ASP). The rank based reform of police organization is not new however. It was introduced earlier for investigation of different types of offences like hudood and blasphemy laws. Owing to the scale of populace and scarce supply of officers to police organizations, rank based reform has limitations. The Police Reforms Committee Report of 2019 that was mandated by the Supreme Court of Pakistan has recommended functional specialization instead of rank based expansion, which is likely to consume more resources by making police organizations top heavy and less effective at grassroots level.

2. Power to summon and arrest

Powers to summon and arrest accused, witnesses and other people connected with criminal cases is an area that was long due for reform. In this regards, the ground breaking reform was introduced by articles 155 and 156 of the Police Order 2002 that criminalized vexatious arrest and abuse of lawful powers by police officers. The abuse of such power, however, was not fully checked and much was desired to be done. The new legislative proposals introduce multiple obligations on police officers vis-à-vis their powers to summon and arrest. These powers may be summarized here:a. Amendment in sections 46 and 54 of the CrPC:Section 46 the CrPC defines the procedure of arrest by linking it to ‘actual touch’ or ‘confinement’. The proposed law reforms provide that, in case of female accused, the actual touch requirement has been substituted with ‘oral intimation’. This is a welcome addition and will facilitate police working. Likewise, the power to arrest under section 54 CrPC has been rightfully qualified with recording reasons in case of an arrest based on suspicion and with the condition to intimation to officer in-charge of a police station.b. Insertion of new sections 54-A, 54-AA, 54-B to 54-J the CrPC: New set of legal provisions are proposed to be added to the CrPC that aim at introducing a rule-based regime for summoning and arrest powers of police officers. Section 54-A is to be added that proposes to introduce a right to counsel for an accused.

Police were always empowered to admit accused to bail in bailable offences. This power, however, has not been frequently used owing to poor police image and excessive labelling of police as a trouble-prone organization. Section 496 of the CrPC has been proposed to be amended to empower police to release accused in bailable offences. This power has been clarified further and has been simplified. This is a positive step but is likely to contribute towards overcharging of accused as, more often than not, the society expects police not to let any accused be released in offences that affect society more acutely due to their prevalence.

Criminal justice system is modelled in and around detection based policing in Pakistan implying more legal powers after registration of criminal case than before its registration. To further strengthen the investigation processes and to oblige police and prosecution to work closely, the new proposals require:a. Use of techniques of investigation including the use of modern devices and forensic methods (through new section 155-A CrPC)b. Mandatory DNA testing in rape cases (through new section 156-C CrPC)c. Preservation of DNA and its database (through new section 156-D CrPC)d. Non summoning of females, juveniles (of less than 15 years of age) and elderly over age of 65 years of age (by amending section 160 CrPC)e. Audio-video recording of statements of persons acquainted with facts of the case under section 161 CrPC (by adding a proviso to section 160 CrPC)f.

Audio-video recording of a confessional statement (by adding a proviso to section 164 CrPC)g. Increasing and covering in detail police-prosecution cooperation (by amending section 173 CrPC)Law reforms and societal needs go hand in hand. The present set of policing reforms introduced in the proposed criminal law reforms package are likely to meet mixed reception by police, prosecutors, bar, and bench. Nonetheless, they are likely to spur the debate about reforming the criminal justice system, which must be designed to protect life, liberty, and property of the citizens who hold high hopes from the state insofar as their rights are concerned.The views expressed in this article are the author’s own in his private capacity. Originally published: