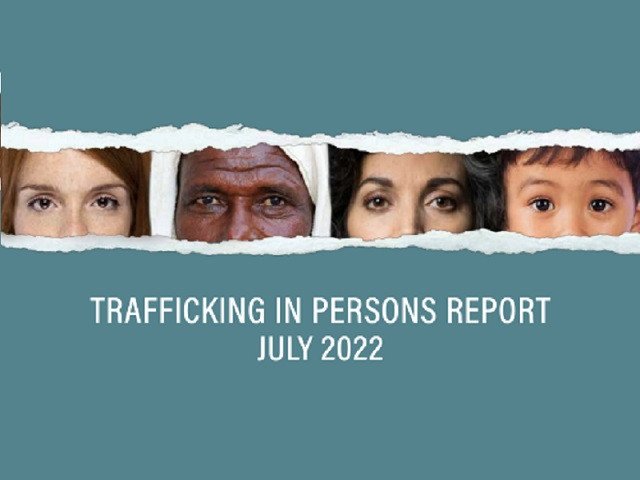 The US State Department on Tuesday released its 2022 Trafficking in Persons (TIP) report that declared Pakistan remains on Tier 2, however, was upgraded in status by being taken off the “watchlist”.

US Secretary of State Antony Blinken launched the report at a ceremony at the State Department.

TIP calls for action against domestic trafficking in human beings. The countries categorised under Tier 2 are those governments that do not fully meet the Trafficking Victims Protection Act (TVPA) minimum standards for the elimination of trafficking but are making significant efforts to bring themselves into compliance with these standards.

Pakistan remains in Tier 2 on the country trafficking scale but has been removed from the “watchlist”, which means in case of a lack of further progress, the country would be downgraded to Tier 3, and sanctions would follow.

“The [Pakistan] government demonstrated overall increasing efforts compared with the previous reporting period, considering the impact of the COVID-19 pandemic, if any, on its anti-trafficking capacity; therefore, Pakistan was upgraded to Tier 2,” the report said.

“The government allocated resources for the implementation of the National Action Plan (NAP) and amended the PTPA to remove provisions that allowed fines in lieu of imprisonment for sex trafficking crimes with women and children as victims.”

This is a step forward from last year when the report on the performance of 188 countries stated that “the government of Pakistan does not fully meet the minimum standards for the elimination of trafficking but is making significant efforts to do so.”

In addition, Pakistan has also been removed from the Child Soldiers Prevention Act (CSPA) list which identifies governments having government-supported armed groups that recruit or use child soldiers, a designation that could result in restrictions on certain security assistance and commercial licensing of military equipment.

However, a recent report released by the HRCP painted a grim picture of women trafficking in the country. The report identified Pakistan as a source, transit and destination for human trafficking, which indicates the danger women, particularly economically vulnerable ones, find themselves in.

Across the country, scores of women are abducted each year. Unfortunately, little priority is accorded to the issue, which has paved the way for the trafficking networks to thrive and coerce women into sex trafficking, child labour, bonded labour, forced begging and forced marriage.

Last year, the government had launched a comprehensive National Action Plan to combat human trafficking, but little progress has been made.

The FIA finds itself strained with minimal resources and capacity because of which it has remained unable to achieve the targets of the plan.

Lack of cohesion among the various law enforcement agencies, absence of reliable data on trafficking, and poor implementation of anti-trafficking laws have further impeded the process of tackling the problem effectively.

The government’s lacklustre attitude towards the issue is worrisome because nearly half of the population of Pakistan constitutes women of which a large proportion is threatened by traffickers.

Even women that have been retrieved from trafficking networks face the risk of re-victimisation due to a lack of protection and general awareness amongst society.